The folder contains all the scripts that handle the sync process from LedgerLink to QBO. 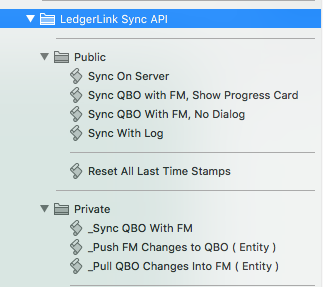 The API, like all APIs, is divided into Public and Private scripts. If there was a need for the user to customize the module, then there would also be a Config folder. Scripts that receive calls from outside the module are placed in the Public folder. Scripts that are called from within the module are placed in the Private folder. We've adopted a script naming convention to prefix private scripts with an underscore. You do not call a script in the private folder from outside the module! Only Public "wrapper" scripts call Private scripts.

These are the master scripts for Sync and each has slightly different behavior:

In here are all the heavy-lifting sync scripts. The basic idea is that LedgerLink: